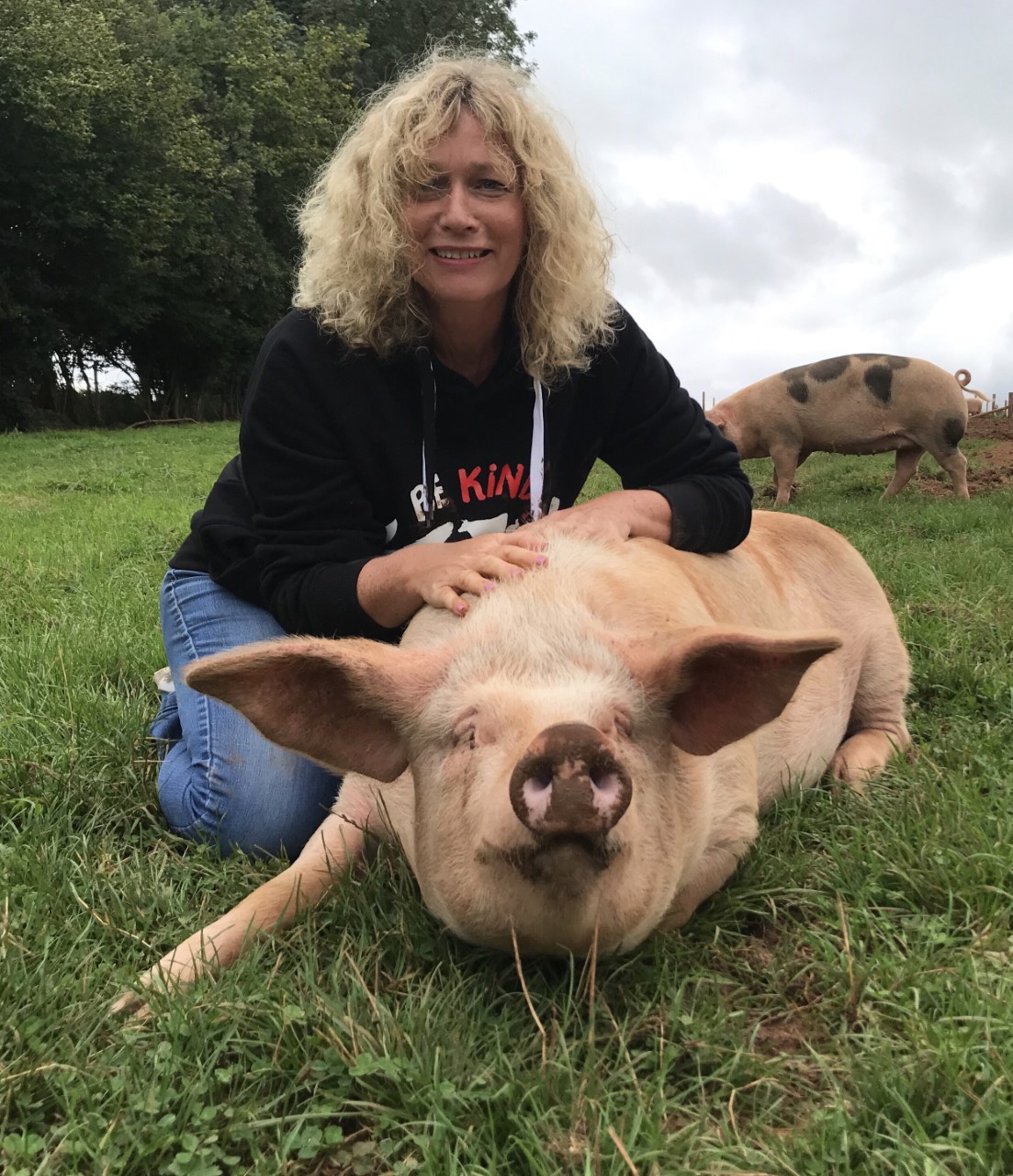 Juliet Gellatley is the Founder & Director of Viva! – the biggest vegan charity in Europe. Viva! launched in 1994, joined by Viva! Poland in 2002. She was previously director of the Vegetarian Society of the UK.

Juliet has created and launched numerous campaigns on the impact of what we eat on the planet and our health. She has also investigated many farms – often the big names – and exposed the devastating animal cruelty that seems to hold no bounds in agribusiness and written several reports, guides and books. In addition to her campaign work, Juliet also has a degree in Zoology & Psychology and is a qualified nutritional therapist.

Viva! is funded by public donations. Check out the Viva! websites: viva.org.uk, vivahealth.org.uk, and scarydairy.org.uk.

1. As a change maker within your industry, tell us a little of your background.

I was born into a loving working class family – my mum was aspirational and we moved house regularly as the family’s income rose. She wasn’t pushy but made me feel that anything is possible if you really want it. My mum said as a kid I ‘fought for the underdog’, and as animals are treated so badly and have no voice, my heart went out to them. I was the first in my family to go to university, which seems funny now as so many people go. I studied zoology (with the clear aim of helping animals), then worked in the media until I could wheedle my way into a paid animal rights job. I moved to the Vegetarian Society where I rose to become its director in my late 20s and then left to set up a vegan campaigning organisation – Viva!

The initial major challenge in setting up a new charity is funding. I founded Viva! from my then home in a hamlet in Cheshire, in the middle of nowhere, surrounded by farmers! I took some big risks but was of the attitude that Viva! had to be a major player – campaigning dynamically on a national level to save animals, and if didn’t work I’d close it down (but I’d tried and I’d move on); or if it did work, then fantastic and I’d give it my all. In fact, it grew incredibly rapidly and within two years we moved to Brighton and then to our current home in Bristol where we now have 30 staff.

The other crazy big challenge was launching a vegan organisation from nothing in a meathead world! Remember veganism was seen as truly extreme back then. I could talk about that one til’ the cows come home to their beautiful sanctuary! But I’d already worked on vegetarianism and helped take it from being ‘radical’ to ‘normal’ within five years. At the Vegetarian Society I launched their first ever campaigns – and they got major publicity including on daytime TV and national TV news. An example of tangible success was persuading secondary schools to provide vegetarian meals – within 18 months it had jumped from 13% to 65% of schools making proper provision.

Women have been driving the momentum in dietary change for decades. 30 years ago women were leading the vegetarian revolution and from that the vegan revolution has evolved. I’m proud that at Viva! we are representative of this and have women in key roles – in fact all senior managers are women.

One of the qualities I have is persistence, which is sorely needed in our field. For example, in 2017 when Viva! first investigated a mega-pig farm, Hogwood, and exposed the atrocities of dying animals dumped in gangways and the dead left to rot with the living, I was sure Tesco would drop them as a supplier. But no. So, despite the farm becoming like Fort Knox, we went back in and filmed the cannibalisation caused by severe stress and atrocious animal welfare, yet still Tesco wouldn’t budge. I wasn’t going to give up! Our team bravely went back again, this time at high risk, and left hidden cameras. We captured the workers hitting the pigs, and this year, Tesco finally dropped Hogwood.

These victories are hard fought. But we have had many of them and veganism is sky rocketing. Also, being a vegan charity, compassion and empathy are a huge part of what we do. Those traits are quite commonly associated with women, too, and I’ve used those qualities to build a vegan charity. The other side of the coin is emotional resilience, being able to take difficult, upsetting investigations and turn them into a positive message. For some people, it would be too traumatic. Other qualities we have at Viva! is to be brave, confident and bold enough to push for veganism in the media, street actions, in the face of huge corporations, when many other groups shy away from that.

4. What advice would you give to women who want to take part in activism or campaign for something they’re passionate about?

Do it. Always be true to your passions! Celebrate them! You can be sure there will be others in your area who feel the same. Find them through social media and national groups like Viva!. We have regular street actions and everyone is welcome – we are always positive in our outreach and it is a great way of doing good while meeting likeminded people.

If you want to work in campaigning and are finding it hard to get a role within a charity, do jobs that train you in useful transferable skills and volunteer with a campaigning group that you can learn from; plus join in with local actions – then go for the job of your dreams.

Viva! has had unprecedented media coverage last year with every national newspaper and almost every regional covering our Vegan Now! environmental campaign – even the Daily Telegraph gave me lead comment! Our recent turkey exposé was covered in the Sun, the Daily Star, the Times and on BBC TV news. We are reaching millions of meat eaters with each campaign and helping people change their hearts, minds and stomachs!  The growth of veganism in the UK in the last two years has been phenomenal. That means less animals suffer and die; less demands on the planet, less forests destroyed for meat and dairy; less fish pulled from the oceans and less pressure on the NHS!

If I have to choose an individual success, it would be Viva! stopping all UK supermarkets from selling kangaroo meat. Again, that campaign took a shed-load of persistence and determination.

The world has always been crazy. But it is still a wondrous place and I’m privileged to have this blip in time on our planet and hope I can contribute something positive. I just think about the animals in the investigations I’ve done, and that sparks my passion. I think you need to be naturally emotionally buoyant to do what I do. For inner peace, I love going to my friend’s animal sanctuary – a few hours in the bliss of the rolling Welsh lush landscape, with streams, woodlands and happy piggies, mischievous sheep and affectionate turkeys is enough to bring me back to life! On a daily basis – my children keep me real and positive.

Non-humans:
My dog Pablo, he is the size of a wolf and looks much like one; and was chained for years in Sarajevo – but is the most noble, kind, and tolerant soul I’ve ever met. And Hope, a pig we rescued. She doesn’t trust people and why would she, having had her piglets repeatedly taken. However, she was saved with her fifth set of piglets and will live with them for life. She is such a protective mum and her sophisticated communication with her babes blows me away. She is a beautiful animal, full of love for her family.

Human:
My mum was, and will always be, my inspiration. She had a tough childhood and responded by being determined to make life better for everyone she loved.


Posted on: 3rd January 2020, Categorised in: Women Leaders in Sustainability